From Michael Dell, renowned founder and chief executive of one of America's largest technology companies, the inside story of the battles that defined him as a leader.

In 1984, soon-to-be college dropout Michael Dell hid signs of his fledgling PC business in the bathroom of his University of Texas dorm room. Almost 30 years later, at the pinnacle of his success as founder and leader of Dell Technologies, he found himself embroiled in a battle for his company's survival. What he'd do next could ensure its legacy--or destroy it completely.

Play Nice But Win is a riveting account of the three battles waged for Dell Technologies: one to launch it, one to keep it, and one to transform it. For the first time, Dell reveals the highs and lows of the company's evolution amidst a rapidly changing industry--and his own, as he matured into the CEO it needed. With humor and humility, he recalls the mentors who showed him how to turn his passion into a business; the competitors who became friends, foes, or both; and the sharks that circled, looking for weakness. What emerges is the long-term vision underpinning his success: that technology is ultimately about people and their potential. 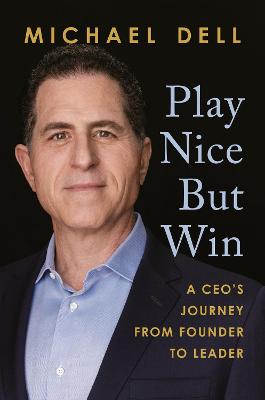 Hardback
Play Nice But Win also appears in these Categories:

How to Organize Yourself
John Caunt
Paperback
€16.25

The Cult of We: WeWork and the Great Start-Up Delusion
Eliot Brown
Paperback
€12.50

The Art of Fairness: The Power of Decency in a World Turned Mean
David Bodanis
Paperback
€12.50

21 Letters on Life and Its Challenges
Charles Handy
Paperback
€12.05

The Power of Not Thinking
Dr Simon Roberts
Paperback
€12.50

How to Write a Marketing Plan
John Westwood
Paperback
€16.25

How to Write Reports and Proposals
Patrick Forsyth
Paperback
€16.25