Political Betrayal, to be launched on November 19th, 2021 is one of the most explosive books to come out of Ireland in 25 years, according to the renowned former political correspondent of RTE, Sean Duignan. From talking to several members of the Haughey Government, author Kevin O Connor, almost 30 years parliamentary correspondent of the Sunday Independent, has discovered that former Taoiseach, Charles Haughey trousered more than 70m from big business throughout his almost 40-year career. Special Branch memorandum seen by the author reveal that Haughey was acting as a spy for the IRA for a long period in his career. Another memorandum discloses that while Minister for Finance he tapped the phone of the then Taoiseach, Jack Lynch. Haughey and the Secret Courts is a story of abuse of power by a Government Minister, interference and undermining of the democratic process by a member of the judiciary and corruption at the highest level of the gardai. It also involves the then Minister for Justice, Charles Haughey and the Secret Courts that he organised for Fianna Fail V.I.Ps.

In Political Betrayal, corruption, drama, romance, scandal and betrayal are all documented and exposed in the culture of excess and intrigue operated by Haughey during his twelve years at the helm and almost 40 years in politics. Read how Haughey spent the illegal 70m. from the journalist who exposed his 27-year affair with journalist Terry Keane in the best seller Sweetie at a cost to the Irish taxpayer of 26,000 a month on wining, dining, presents and holidays. 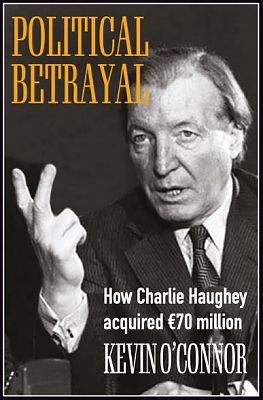 "You Just Need to Lose Weight": And 19 Other Myths About Fat People
Aubrey Gordon
Paperback
€18.75

The Tastemaker: My Life with the Legends and Geniuses of Rock Music
Tony King
Hardback
€24.99

Getting Better: Life lessons on going under, getting over it, and getting throug
Michael Rosen
Hardback
€21.25

The Half Known Life: Finding Paradise in a Divided World
Pico Iyer
Hardback
€21.25

Emotional Ignorance: Lost and found in the science of emotion
Dean Burnett
Paperback
€18.75

Us: Reconnect with Your Partner and Build a Loving and Lasting Relationship
Terrence Real
Hardback
€23.75

Becoming the One
Sheleana Aiyana
Hardback
€21.25