Putin's People: How the KGB Took Back Russia and then Turned On the West

The hacking of the 2016 US elections. The sponsorship of extremist politics in Europe. War in Ukraine. In recent years, Vladimir Putin's Russia has waged a concerted campaign to expand its influence and undermine Western institutions. But how and why did all this come about and who has orchestrated it? This rigorous and revelatory book explains how this happened, Putin's rise to power, and how Russian black cash is subverting the world. In Putin's People, former Moscow correspondent and investigative journalist Catherine Belton tells the untold story of the rise of Vladimir Putin and the small group of KGB men surrounding him. Delving deep into the workings of Putin's Kremlin, Belton accesses key inside players to reveal how Putin replaced the free-wheeling tycoons of the Yeltsin era with a new generation of loyal oligarchs, who in turn subverted their country's economy and legal system and expanded its influence in the West. The result is a chilling and revelatory expose of the KGB's renaissance - a story that began long ago in the murk of the Soviet collapse when networks of operatives were able to siphon billions of dollars out of Russia and into the West. After Putin's takeover of the economy, some of these networks acquired new flows of cash to realise their goals. Based on many years of research, Belton charts the relentless seizure of private companies and the installation of those closest to Putin into the richest, highest seats of power. Ranging from Moscow to London, Switzerland and Trump's America, and introducing a colourful cast of characters, Putin's People is a gripping and terrifying account of how hopes for the new Russia went astray, with stark consequences for its inhabitants and, increasingly, the world. 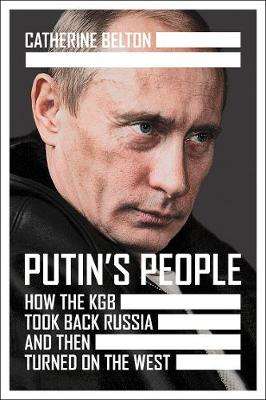 Paperback
Putin's People: How the KGB Took Back Russia and then Turned On the West also appears in these Categories:

Why I'm No Longer Talking to White People About Race
Reni Eddo-Lodge
€11.25