Notes from a Lost Tribe: The Poor Ould Fellas

Combining the razor-sharp wit of writer Declan Lynch with illustrations and contributions from Father Ted co-creator Arthur Mathews. Since Declan Lynch and Arthur Mathews first shone a light into this darkest corner of the darkest living room in all of Ireland over a decade ago, things have actually got worse for that almost-forgotten species we call the Poor Ould Fellas - impossible though it seems. Further confined to their unhappy dwelling places by the drink-driving laws, a new range of challenges have emerged to torment them in a baffling post-analog world, where emails seek to release them from the few remaining shillings that weren't stolen by bankers during the crash. Now they must negotiate a universe full of new words (falafel, bitcoin, Spotify) and concepts (texting, sexting, going away for the weekend, composing a tweet, growing a beard, online banking) that mean absolutely nothing to them. Notes from a Lost Tribe is a hilarious road map through a world of forgotten men and their equally forgotten dogs, who ask for so little - yet it is denied them. And still ... somehow ... inexplicably ... they go on. 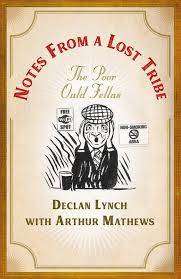 Paperback
Notes from a Lost Tribe: The Poor Ould Fellas also appears in these Categories:

Calm the F**k Down: An Irreverent Book of Sh*t you Need to Let Go
Georgia Mack
€9.85

Do You Know Your Wife?: A Quiz About the Woman in Your Life
Dan Carlinsky
€7.40

Do You Know Your Husband?: A Quiz About the Man in Your Life
Dan Carlinsky
€7.40

8% off
Dishonesty is the Second-Best Policy: And Other Rules to Live By
David Mitchell
€16.99

The Little Book of Lizzo
Various
€9.85

THE BOOK OF FECKIN' IRISH INSULTS FOR GOBDAWS AS THICK AS MANURE AND ONLY HALF A
Colin Murphy
€7.99