The Best Catholics in the World

When Dubliner Derek Scally goes to Christmas Eve Mass on a visit home from Berlin, he finds more memories than congregants in the church where he was once an altar boy. Not for the first time, the collapse of the Catholic Church in Ireland brings to mind the fall of another powerful ideology - East German communism. While Germans are engaging earnestly with their past, Scally sees nothing comparable going on in his native land. So he embarks on a quest to unravel the tight hold the Church had on the Irish. He travels the length and breadth of Ireland and across Europe, going to Masses, novenas, shrines and seminaries, talking to those who have abandoned the Church and those who have held on, to survivors and campaigners, to writers, historians, psychologists and many more. And he has probing and revealing encounters with Vatican officials, priests and religious along the way.

The Best Catholics in the World is the remarkable result of his three-year journey. With wit, wisdom and compassion Scally gives voice and definition to the murky and difficult questions that face a society coming to terms with its troubling past. It is both a lively personal odyssey and a resonant and gripping work of reporting that is a major contribution to the story of Ireland.


'A clear-headed account of a changing country and a provocative insight into a time that many would rather forget' John Boyne . 'An engaging and incisive book that asks what keeping the faith cost us, how it shaped us and what it means now' Caelainn Hogan, author of Republic of Shame. 'Offers some challenging end-of-an-era reflections on being Catholic in the scandal-ridden church of contemporary Ireland' Mary McAleese. 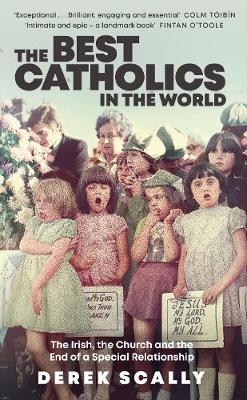 20% offTrade Paperback
The Best Catholics in the World also appears in these Categories:

How to Be a Christian: Reflections & Essays
C.S. Lewis
Paperback
€10.95

The Way We Were: Centenary essays on Catholic Ireland
Mary Kenny
Hardback
€16.99

Lessons from a Bedside: Wisdom For Living
Breda Casserly
Paperback
€12.50

Muslim, Actually: How Islam is Misunderstood and Why it Matters
Tawseef Khan
Paperback
€12.50

A Saint a Day: 365 True Stories of Faith and Heroism
Meredith Hinds
Hardback
€12.50