Sad Little Men: Private Schools and the Ruin of England

In 1975, as a child, Richard Beard was sent away from his home to sleep in a dormitory. So were David Cameron and Boris Johnson. In those days a private boys' boarding school education was largely the same experience as it had been for generations: a training for the challenges of Empire. He didn't enjoy it. But the first and most important lesson was to not let that show. Being separated from the people who love you is traumatic. How did that feel at the time, and what sort of adult does it mould? This is a story about England, and a portrait of a type of boy, trained to lead, who becomes a certain type of man. As clearly as an X-ray, it reveals the make-up of those who seek power - what makes them tick, and why. Sad Little Men addresses debates about privilege head-on; clearly and unforgettably, it shows the problem with putting a succession of men from boarding schools into positions of influence, including 10 Downing Street. Is this who we want in charge, especially at a time of crisis? It is a passionate, tender reckoning - with one individual's past, but also with a national bad habit. 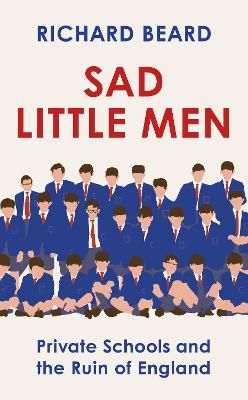 Hardback
Sad Little Men: Private Schools and the Ruin of England also appears in these Categories:

Zucked: Waking Up to the Facebook Catastrophe
Roger McNamee
Paperback
€12.05

Why Women Are Poorer Than Men and What We Can Do About It
Annabelle Williams
Paperback
€12.50

Them and Us
Philippe Legrain
Paperback
€13.75

This Mortal Coil: A History of Death
Andrew Doig
Hardback
€31.25

What Do Men Want?: Masculinity and Its Discontents
Nina Power
Hardback
€23.75