The World Philosophy Made: From Plato to the Digital Age

How philosophy transformed human knowledge and the world we live in Philosophical investigation is the root of all human knowledge. Developing new concepts, reinterpreting old truths, and reconceptualizing fundamental questions, philosophy has progressed-and driven human progress-for more than two millennia. In short, we live in a world philosophy made. In this concise history of philosophy's world-shaping impact, Scott Soames demonstrates that the modern world-including its science, technology, and politics-simply would not be possible without the accomplishments of philosophy. Firmly rebutting the misconception of philosophy as ivory-tower thinking, Soames traces its essential contributions to fields as diverse as law and logic, psychology and economics, relativity and rational decision theory. Beginning with the giants of ancient Greek philosophy, The World Philosophy Made chronicles the achievements of the great thinkers, from the medieval and early modern eras to the present. It explores how philosophy has shaped our language, science, mathematics, religion, culture, morality, education, and politics, as well as our understanding of ourselves. Philosophy's idea of rational inquiry as the key to theoretical knowledge and practical wisdom has transformed the world in which we live. From the laws that govern society to the digital technology that permeates modern life, philosophy has opened up new possibilities and set us on more productive paths. The World Philosophy Made explains and illuminates as never before the inexhaustible richness of philosophy and its influence on our individual and collective lives. 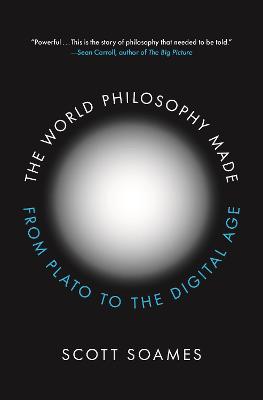 Paperback
The World Philosophy Made: From Plato to the Digital Age also appears in these Categories:

Do Right and Fear No One
Leslie Thomas QC
Hardback
€24.99

How To Be a Stoic
Epictetus
Paperback
€7.40

The Enlightenment: The Pursuit of Happiness 1680-1790
Ritchie Robertson
Paperback
€23.75

Time of the Magicians: The Great Decade of Philosophy, 1919-1929
Wolfram Eilenberger
Paperback
€13.75

The Tibetan Book of the Dead
Padmasambhava
Hardback
€16.25

How to Innovate: An Ancient Guide to Creative Thinking
Aristotle
Hardback
€16.05

This is It: Essays on Zen and Spiritual Experience
Alan W Watts
Paperback
€12.50

How to Control the Uncontrollable
Ben Aldridge
Paperback
€16.25