From Laois to Kerry

For many centuries before its plantation by the English and renaming as Queens County, Laois was under the control of the Seven Septs (Clans), the OMoores, OKellys, OLawlors, ODowlings, ODorans, ODevoys or ODeevys or ODees and McEvoys. Following many bloody battles the surviving Septs were transplanted to Kerry, being under sentence of death if returning to Laois. The land in Kerry was available for transplantation following the unspeakable horrors of the ethnic cleansing of Munster during the Elizabethan-Desmond war. The Septs were established in Kerry as tenant farmers under their landlord, Patrick Crosbie. These dramatic events are reviewed in Part I as well as a detailed tracing of the continuing strong presence of the Laois Sept descendants in Kerry through the centuries down to the present day. In Part II, the remarkable lives of Patrick Crosbie and his son Sir Pierce Crosbie are discussed in detail. Patrick Crosbie was a leading figure in Irish history during the plantation period, posing as an English imposter while in reality being a MacCrossan, bards to the OMoores of Laois.Sir Pierce Crosbie, subsequent landlord to the Septs in Kerry, along with leading regiments in various wars, was both Cupholder and Gentleman of the Kings Bedchamber of successive Kings, James I and Charles I. He lost his estates and was jailed due to his implacable opposition to the Irish Lord Deputy Wentworth, only to regain them when Wentworth was executed for treason. He was also closely associated with what is arguably the most notorious sex scandal in British history in which his stepson the Earl of Castlehaven was executed for sexual depravity. His remarkable career ended in supporting the Irish Catholic Confederacy in the 1640s. Michael Christopher Keane is a retired lecturer from University College, Cork. A native of Tarbert, Co Kerry, he now lives in Farran, Co Cork. 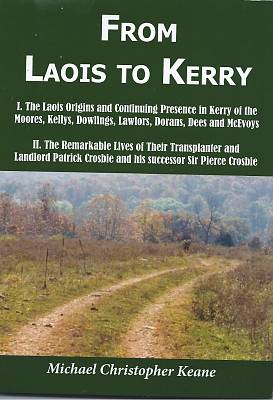 Paperback
From Laois to Kerry also appears in these Categories:

The Twilight of Unionism: Ulster and the Future of Northern Ireland
Geoffrey Bell
Trade Paperback
€18.75