Republic of Shame: Stories from Ireland's Institutions for 'Fallen Women'

Until terrifyingly recently, the Catholic church, acting with the blessing of the Irish state, operated a network of institutions for the concealment, punishment and exploitation of 'fallen women'. In the Magdalene laundries, girls and women were incarcerated and enslaved. And in the mother-and-baby homes, women who had become pregnant out of wedlock were hidden from view, and their babies were taken away to be adopted - if, that is, they didn't die first. Some of the stories of these institutions and the people whose lives they touched have broken through to global attention. We know about Philomena Lee and her son; and the mass infant grave that was discovered at the mother-and-baby home in Tuam has made news all over the world. The Irish state has apologized for its role, and has commissioned investigations. But we still know remarkably little about how Ireland's shame-industrial complex operated. Caelainn Hogan - a brilliant young journalist, born out of wedlock in an Ireland that was only just starting to free itself from the worst excesses of Catholic morality - has been talking to the survivors of the institutions and to the religious orders that operated them. She has visited the sites of the institutions and studied state documents that have much to reveal about how they operated. The result is a startling and often moving account of how an entire society colluded to operate a sort of gulag for unmarried mothers and their babies. In the great tradition of Anna Funder's Stasiland and Barbara Demick's Nothing to Envy- Real Lives in North Korea - both winners of the Samuel Johnson Prize - Republic of Shame is an astounding portrait of a deeply bizarre culture of control. 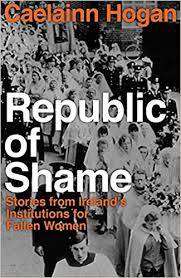 21% offPaperback
Republic of Shame: Stories from Ireland's Institutions for 'Fallen Women' also appears in these Categories: