"Resilient is one of those incredibly rare things - a sequel that actually improves on its predecessor. Stroud presents us with a complex, multifaceted science-fiction experience that offers a deeply compelling narrative, interlaced with rich and complex world-building and three-dimensional characters." - The Sci-Fi & Fantasy Reviewer AD 2118. Humanity has colonised the Moon, Mars, Ceres and Europa. The partnership of corporations and governments has energized the space programme for one hundred years. That partnership is shattered when a terrorist attack destroys the world's biggest solar array in Atacama, Chile, altering the global economic balance. On Mars, at Phobos Station, Doctor Emerson Drake arrives, responding to an emergency call to assist a shuttle of wounded miners, but when those miners turn out to be insurgents, Drake realises he is trapped and fighting to survive. In deep space, Captain Ellisa Shann has passed her limits. Now, the last survivors of the Khidr have to choose whether to try to get home on the captured ship, Gallowglass, or stay to observe the strange gravity anomaly that swallowed up the remains of their vessel. On Earth, in an undisclosed location, Natalie Holder finally has an opportunity to break free from her confinement, where she has been experimented on, multiple times. Her consciousness is transmitted to Phobos Station, just as insurgents take over the facility. Holder and Drake form an alliance but are separated. Drake is captured and taken to the insurgent leader - Rocher - a clone of the stowaway who caused the munity on Captain Shann's Khidr. Allen Stroud's Resilient is a masterpiece of hard sci-fi, a worthy follow up from events of his successful and highly-praised Flame Tree Press debut, Fearless. FLAME TREE PRESS is the imprint of long-standing independent Flame Tree Publishing, dedicated to full-length original fiction in the horror and suspense, science fiction & fantasy, and crime / mystery / thriller categories. The list brings together fantastic new authors and the more established; the award winners, and exciting, original voices. Learn more about Flame Tree Press at www.flametreepress.com and connect on social media @FlameTreePress 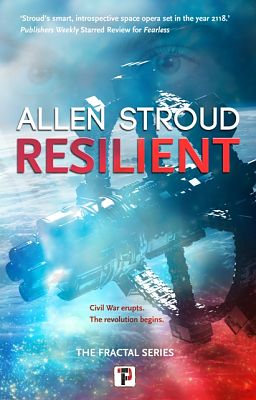 Before the Coffee Gets Cold
Toshikazu Kawaguchi
Paperback
€12.50

Battling the Wind and Waves on the Sea of Commerce
John Xiao Zhang
Paperback
€13.75

And Then I Woke Up
Malcolm Devlin
Paperback
€13.75

Sisters of the Forsaken Stars
Lina Rather
Paperback
€16.25

The Densham Do
Bruce Harris
Paperback
€12.50