Quotable quotes. The building blocks of wisdom. Bite size nuggets of insight that pave the road to understanding. The life blood of philosophy. The nails that hold together universal truth. And occasionally erroneous bullshit. Lightning never strikes twice. Unless you're the Empire State building, which is struck an average 25 times a year. The definition of a fool is someone who does the same thing over and over again expecting different results. In my experience I have been arrested for certain behavior on one day and greatly rewarded for the same behavoir on another. I have repeated my actions and assumptions (though the circumstances changed) and gotten different results. Therefore I am the definitation of a fool, a fact I will not argue with because anyone who argues with a fool may be mistaken for one. Belief is truth, truth is the most believable lie, aned Fauxlosophy is the most memorable pronouncements of the true believer. 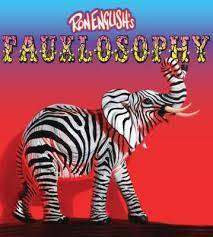 Do You Know Your Groom?: A Quiz About the Man in Your Life
Dan Carlinsky
€7.40

The Daily Jane Austen: A Year of Quotes
Jane Austen
€12.05