Nutshell on evidence law is a revision tool , summarising the essential components of the vast subject of evidence law. it is a user-friendly, accurate and concise work that will be an invaluable study aid.

It outlines the main principles and major cases in the following areas: contents, the burden of proof, the testimony of witnesses, corroboration, identification evidence, leading evidence of an accused's previous convictions (similar fact evidence), cross-examing the accused on his previous convictions or his bad character, the rule against hearsay, confession evidence, evidence obtained in breach of an accused's constitutional rights and illegally obtained, evidence, expert and opinion evidence, privilege. Ross Gorman is a practising barrister. He is also a tutor in Griffith College Dublin and in The Honorable Society of Kings Inns. 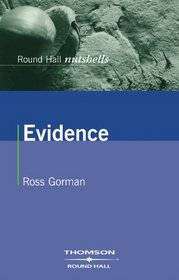 Paperback
Round Hall Nutshells Evidence also appears in these Categories:

The Best Interests of the Child: 3rd Edition
Eileen McPartland
€12.99