Savage Arena: K2, Changabang and the North Face of the Eiger

Joe Tasker lies, struck down by illness, in a damp, bug-infested room in the Himalaya, wondering if he will be well enough to climb Dunagiri, his first venture to the 'big' mountains. One of Britain's foremost mountaineers and a pioneer of lightweight climbing, he is about to attempt one of the first true 'alpine-style' climbs in the Greater Ranges. The Dunagiri attempt forms part of Tasker's striking tale of adventure in the savage arena of the mountains. A superb writer, he vividly describes the first British winter ascent of the North Face of the Eiger, the first ascent of the West Wall of Changabang - considered a 'preposterous' plan by the climbing world - and his two unsuccessful attempts on K2, the second highest mountain on Earth. Savage Arena is both moving and exciting, an inspirational tale of the adventuring spirit which follows its own path, endlessly seeking new challenges, climbs and difficulties to overcome. It is not reaching the summit which counts, it is the journey to it. It is also a story of the stresses and strains of living for long periods in constant anxiety, often with only one other person, and of the close and vital human relationships which spring from those circumstances. 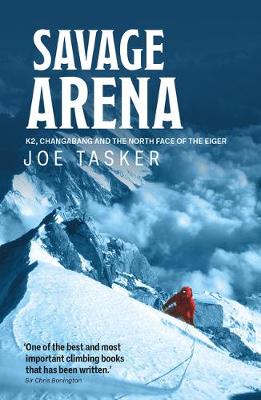 Paperback
Savage Arena: K2, Changabang and the North Face of the Eiger also appears in these Categories:

Golf is Not a Game of Perfect
Dr. Robert J. Rotella
Paperback
€11.10

How to Win : Rugby and Leadership
Clive Woodward
Paperback
€13.25