Shadows from the Trenches

Approximately 150,000 Irish officers and men joined the British Army during the First World War. What happened to them when they returned home? What determining role (if any) did they play? Most importantly, did they fall victims of selective revolutionary violence and face the wrath of the IRA for having fought for the British Crown in 1914-1918?

As steamers docked in Dublin Bay and men disembarked, they began to follow different paths according to their expectations, political beliefs, and often according to the possibilities their mother-land would consent to offer them. Transfers of loyalty and transfers of military skills characterised the demobilisation of those Great War veterans. Hundreds pledged allegiance to the Irish Republican Army while thousands joined the ranks of the Royal Irish Constabulary and the British Army. After the signing of the Anglo-Irish Treaty, ex-servicemen consolidated the institutions of the new Irish Free State whereas a minority remained loyal to the idea of an Irish Republic. Those who refrained from taking an active part in the transformation of Ireland found themselves in a society plagued by unemployment and ongoing unrest. Largely forgotten in history, their stories beg to be heard.

The centenary of the War of Independence and the Civil War represents an unexpected yet welcome moment to challenge traditional narratives and shed light on the contribution of Great War veterans to the Irish Revolution. What happened in Ireland was far from being an isolated case in European history. Re-mobilisations and re-engagements of Great War veterans characterised the internal dynamics within other European countries and states undergoing post-war transformations, revolutions or civil conflicts. Drawing on archives in in England, Northern Ireland, the Republic of Ireland, and on hitherto unsolicited testimonies, Emmanuel Destenay tracks the trajectories of these shadows from the trenches, unveiling their hopes, expectations and uncertainties. 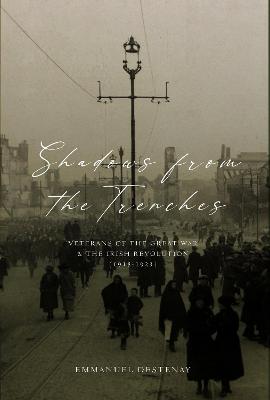 Trade Paperback
Shadows from the Trenches also appears in these Categories:

A Pocket History of the Irish Famine
Hardback
€5.99