The out-of-this-world new adventure from number-one-bestselling author of The Danger Gang and The Christmasaurus: Tom Fletcher.

George, Neila and Bash are the worst band on Earth. George wants them to be brilliant - but Neila has stage fright, and Bash is too distracted by his obsession with stars, aliens and faraway planets. But what they lack in talent and confidence, they make up for in heart.

They're determined to blow their friends away at their school Battle of the Bands contest. But the moment they start to play...

They're beamed up into space!!!

Now the kids face an even bigger challenge: Battle of the Bands, but the intergalactic version. They're competing against alien bands from every galaxy! And if they don't win, they might never make it home again...

Can the worst band on Earth become the best band in the universe?

An intergalactically awesome tale of celebrating difference, believing in yourself, and the power of friendship. 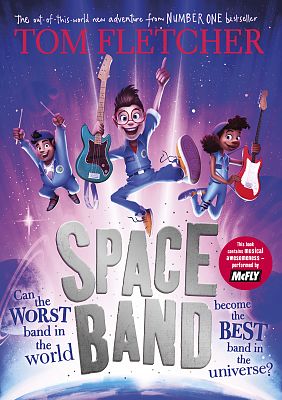 What Make us Human: A Scientist's Guide to our Amazing Existence
Luke O'Neill
Hardback
€19.99

20% off
The Day I Got Trapped In My Brain
Amy Huberman
Paperback
€7.99

9% off
Unstoppable Us, Volume 1: How Humans Took Over the World
Yuval Noah Harari
Paperback
€16.99

20% off
The Bedtime Book of Impossible Questions
Isabel Thomas
Hardback
€12.99

20% off
Meanwhile Back on Earth
Oliver Jeffers
Hardback
€16.99

13% off
The Ministry of Unladylike Activity
Robin Stevens
Paperback
€12.99

5% off
Big Ideas from History: a history of the world for You
The School of Life
Hardback
€25.99

What Make us Human: A Scientist's Guide to our Amazing Existence
Luke O'Neill
Hardback
€19.99

20% off
The Day I Got Trapped In My Brain
Amy Huberman
Paperback
€7.99

20% off
What the Ladybird Heard at Christmas
Julia Donaldson
Hardback
€12.99

The Snail and the Whale
Julia Donaldson
Board Book
€8.75

3for2!
The Gruffalo
Julia Donaldson
Board Book
€8.75

11% off
Where Are You, Puffling?: An Irish Adventure
Gerry Daly
Paperback
€9.99

13% off
The Book That No One Wanted to Read
Richard Ayoade
Hardback
€11.99

The Fart that Changed the World
Stephen Mangan
Paperback
€9.99

10% off
The Friendship Fairies Go to Camp
Lucy Kennedy
Paperback
€8.99

20% off
The Case of the Fishy Detective (Einstein the Penguin, Book 2)
Iona Rangeley
Hardback
€12.99