Statesman of Europe: A Life of Sir Edward Grey

'The lamps are going out all over Europe. We shall not see them lit again in our life-time.' The words of Sir Edward Grey, looking out from the windows of the Foreign Office in early August 1914, are amongst the most famous in European history, and encapsulate the impending end of the nineteenth-century world. The man who spoke them was Britain's longest-ever serving Foreign Secretary (in a single span of office) and one of the great figures of late Victorian and Edwardian Britain. Statesman of Europe is a magnificent portrait of an age and describes the three decades before the First World War through the prism of his biography, which is based almost entirely on archival sources and presents a detailed account of the main domestic and international events, and of the main personalities of the era. In particular, it presents a fresh understanding of the approach to war in the years and months before its outbreak, and Grey's role in the unfolding of events. 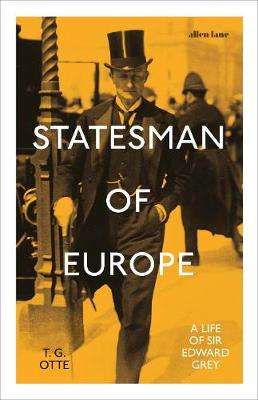 Hardback
Statesman of Europe: A Life of Sir Edward Grey also appears in these Categories:

America in Retreat: The Decline of US Leadership from WW2 to Covid-19
Michael Pembroke
€24.10

Kim and Jim: Philby and Angleton, Friends and Enemies in the Cold War
Michael Holzman
€18.05

Crisis of Conscience: Whistleblowing in an Age of Fraud
Tom Mueller
€14.45

Dancing in the Mosque: An Afghan Mother's Letter to her Son
Homeira Qaderi
€20.45