Stretching: The 40th Anniversary Edition. Stretches for the Digital World.

Stretching is the most popular fitness book in the world, having sold over 33/4 million copies in 40 years. It has been translated into 23 languages. In this new edition there are stretches for improving the bad posture attributable to cell phone usage ("tech neck"), and for people using computers.

This is the book that people tell their friends about, that trainers suggest for virtually every sport and activity, and that medical professionals recommend to people just starting to get back in shape. Stretching first appeared in 1980 as a new generation of Americans became committed to running, cycling, aerobic training, and workouts in the gym -- all of which are commonplace now.

It features stretching routines specific to a variety of people, including sports enthusiasts, travelers, children, gardeners, and people in wheelchairs. There is a new section titled "Stretches for the Digital World," with stretches for people using cell phones and/or computers, as well as tips for better posture and stretches to do in an office environment. 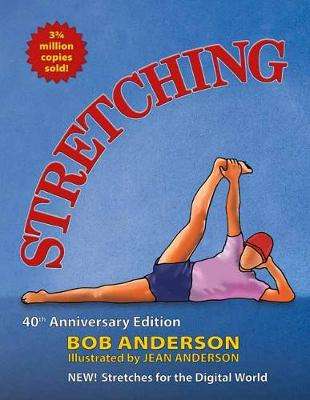 Paperback
Stretching: The 40th Anniversary Edition. Stretches for the Digital World. also appears in these Categories:

At the Coalface: A Family Guide to Caring for Older People in Ireland
Maire O'Dwyer
€17.99

Book About Getting Older (for people who don't want to talk about it)
Lucy Pollock
€20.45

Breath: The New Science of a Lost Art
James Nestor
€18.05

That One Patient: Doctors and Nurses' Stories of the Patients Who Changed Their
Ellen de Visser
€15.65

The Encyclopedia of Ailments and Diseases
Jacques Martel

The Dukan Diet: The Revised and Updated Edition
Pierre Dukan
€13.25

Drink?: The New Science of Alcohol and Your Health
David Nutt
€12.05

Your Body In Balance: The New Science of Food, Hormones and Health
Dr Neal Barnard
€20.45