The Accidental Adventures of Onion O'Brien: The Secret Scientist

Onion and the gang are at it again. This time they've stumbled across a Russian scientist at an old folks' home whose crazy experiments are causing all kinds of confusion in Ballinalud. Suddenly there are old people acting strangely all over suburbia, power cuts and People in Black (PIBs) menacing the locals. Not even The Ferg and Judge, the local guards, can figure it out. It's up to the Five Os to solve the mystery, preferably before dinnertime. The Secret Scientist is the third accidental adventure for Onion O'Brien and his gang of friends, the Five Os. This hilarious story from the zany brain of one of Ireland's greatest funny men will be adored by all kids with a zest for fun. 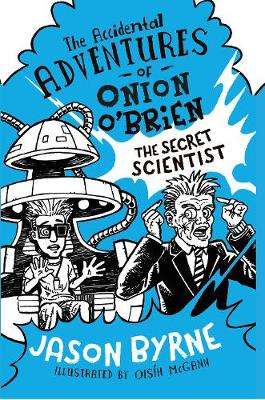 Hardback
The Accidental Adventures of Onion O'Brien: The Secret Scientist also appears in these Categories:

Molly Thompson and the Crypt of the Blue Moon
Nick Tomlinson
€8.40

10% off
The Miracle on Ebenezer Street
Catherine Doyle
€12.99