The Boy in the Striped Pyjamas

Haunting World War 2 drama told from the perspective of Bruno (Asa Butterfield), the eight-year-old son of the commandant at a concentration camp (David Thewlis). Bruno has just moved with his family into a new house in the middle of nowhere, and feels imprisoned by his mother (Vera Farmiga)'s persistent warnings never to venture beyond the garden's high walls. From what he can make of the view from his bedroom window, he thinks he must be living on a strange sort of farm where the workers seem to get straight out of bed and go to work on the fields. When his curiosity leads him through an open door and up to a vast electric fence, he meets a boy there of exactly his own age - but with a very different story to tell. 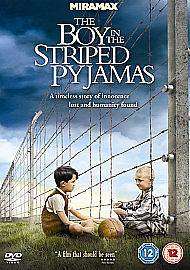 DVD
The Boy in the Striped Pyjamas also appears in these Categories: