The Emperor's Feast is the epic story of a nation and a people, told through one of its most fundamental pillars and successful exports: food.

Following the journeys of different ingredients, dishes and eating habits over 5,000 years of history, author and presenter Jonathan Clements examines how China's political, cultural and technological evolution and her remarkable entrance onto the world stage have impacted how the Chinese - and the rest of the world - eat, drink and cook.

We see the influence of invaders such as the Mongols and the Manchus, and discover how food - like the fiery cuisine of Sichuan or the hardy dishes of the north - often became a stand-in for regional and national identities. We also follow Chinese flavours to the shores of Europe and America, where enterprising chefs and home cooks created new traditions and dishes unheard of in the homeland.

From dim sum to mooncakes to General Tso's chicken, The Emperor's Feast shows us that the story of Chinese food is ultimately the story of a nation: not just the one that history tells us, but also the one that China tells us about itself. 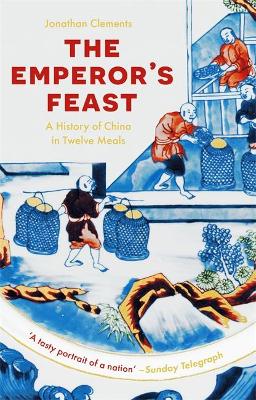 Paperback
The Emperor's Feast also appears in these Categories:

Aftermath: Life in the Fallout of the Third Reich
Harald Jahner
Paperback
€12.50