The Enigma of Arrival

Taking its title from the strangely frozen picture by the surrealist painter Giorgio de Chirico, The Enigma of Arrival tells the story of a young Indian from the Caribbean arriving in post-imperial England and consciously, over many years, finding himself as a writer. It is the story of a journey, from one place to another, from the British colony of Trinidad to the ancient countryside of England, and from one state of mind to another, and is perhaps Naipaul's most autobiographical work. Yet alongside this he weaves a rich and complex web of invention and observation. Finding depth and pathos in the smallest moments - the death of a cottager, the firing of an estate's gardener - Naipaul also comprehends the bigger picture - watching as the old world is lost to the gradual but permanent changes wrought on the English landscape by the march of `progress'. This is a moving and beautiful novel told with great dignity, compassion and candour. `Written with the expected beauty of style . . . Instead of diminishing life, Naipaul ennobles it' Anthony Burgess, Observer `The conclusion is both heart-breaking and bracing: the only antidote to destruction - of dreams, of reality - is remembering. As eloquently as anyone now writing, Naipaul remembers.' Time 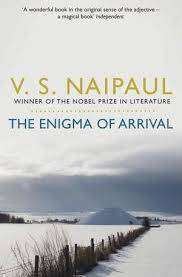 Paperback
The Enigma of Arrival also appears in these Categories: