Winner of the Baileys Women's Prize for Fiction for 2016. Shortlisted for the Bord Gáis Energy Irish Book Awards Sunday Independent Best Newcomer of the Year Award for 2015.
'The Glorious Heresies heralds the arrival of a glorious, foul-mouthed, fizzing new talent' SUNDAY TIMES 'Totally and unmistakably the real deal' KEVIN BARRY 'A real stunner; a wild ride of a read' DONAL RYAN

'He was definitely dead, whoever he was. He wore a once-black jumper and a pair of shiny tracksuit bottoms. The back of his head was cracked and his hair matted, but it had been foxy before that. A tall man, a skinny rake, another string of piss, now departed. She hadn't gotten a look at his face before she flaked him with the Holy Stone and she couldn't bring herself to turn him over.' One messy murder affects the lives of five misfits who exist on the fringes of Ireland's post-crash society. Ryan is a fifteen-year-old drug dealer desperate not to turn out like his alcoholic father Tony, whose obsession with his unhinged next-door neighbour threatens to ruin him and his family.

Georgie is a prostitute whose willingness to feign a religious conversion has dangerous repercussions, while Maureen, the accidental murderer, has returned to Cork after forty years in exile to discover that Jimmy, the son she was forced to give up years before, has grown into the most fearsome gangster in the city. In seeking atonement for the murder and a multitude of other perceived sins, Maureen threatens to destroy everything her son has worked so hard for, while her actions risk bringing the intertwined lives of the Irish underworld into the spotlight ...


Biting, moving and darkly funny, The Glorious Heresies explores salvation, shame and the legacy of Ireland's twentieth-century attitudes to sex and family. 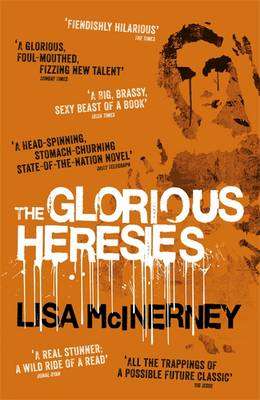 2.5% offPaperback
The Glorious Heresies also appears in these Categories:

Something to Live For
Richard Roper
€16.05

19% off
Elsewhere: One Woman, One Rucksack, One Lifetime of Travel
Rosita Boland
€14.99