F. Scott Fitzgeralds classic American novel of the Roaring Twenties is beloved by generations of readers and stands as his crowning work. This audio edition, authorized by the Fitzgerald estate, is narrated by Oscar-nominated actor Jake Gyllenhaal (Brokeback Mountain). Gyllenhaal's performance is a faithful delivery in the voice of Nick Carraway, the Midwesterner-turned-New-York-bond salesman, who rents a small house next door to the mysterious millionaire Jay Gatsby. There, he has a firsthand view of Gatsbys lavish West Egg partiesand of his undying love for the beautiful Daisy Buchanan.

After meeting and losing Daisy during the war, Gatsby has made himself fabulously wealthy. Now, he believes that his only way to true happiness is to find his way back into Daisys life, and he uses Nick to try to reach her. What happens when the characters fantasies are confronted with reality makes for a startling conclusion to this iconic masterpiece.

This special audio edition joins the recent filmas well as many other movie, radio, theater, and even video-game adaptationsas a fitting tribute to the cultural significance of Fitzgeralds Jazz Age classic, widely regarded as one of the greatest stories ever told. 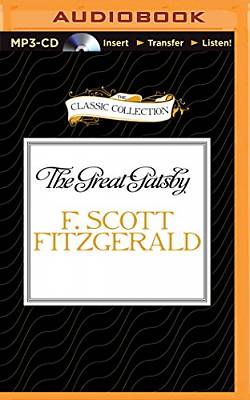 The Hitchhiker's Guide to the Galaxy CD
Douglas Adams
€26.15

The Restaurant at the End of the Universe CD
Douglas Adams
€21.99

The Testaments: The Sequel to The Handmaid's Tale CD
Margaret Atwood
€24.30

Meditations for Breaking the Habit of Being Yourself CD
Joe Dispenza
€15.80