Jo Nesbo, author of the bestselling Harry Hole crime series, is back with a vivid psychological thriller about the bond between orphaned brothers. How far would you go to be your brother's keeper?

Before Roy's father died in the car crash that also killed Roy's mother, he told his teenaged son that it was his job to protect his little brother, Carl, from the world and from Carl's own impulsive nature. Roy took that job seriously, especially after the two were orphaned. But a small part of him was happy when Carl decided that the tiny town of Os in the mountains of Norway wasn't big enough to hold him and took off to Canada to make his fortune. Which left Roy to pursue the quiet life he loved as a mechanic in the place where they grew up.

Then suddenly an older Carl is back, full of big plans to develop a resort hotel on the family land, promising that not only will the brothers strike it rich, but so will the town. With him is his fierce and beautiful wife, Shannon, an architect he met on his travels, a woman who soon breaks down the lonely Roy's walls. And Carl's reappearance sparks something even more dangerous than envy in his brother's heart--it sparks fear. Carl's homecoming threatens to shake loose every carefully buried family secret.

As psychologically acute as it is disturbing, with plot twists you never see coming, Jo Nesbo's new novel is the work of a master of noir at the top of his game.

'I read The Kingdom and couldn't put it down...suspenseful...original...this one is special in every way' - Stephen King 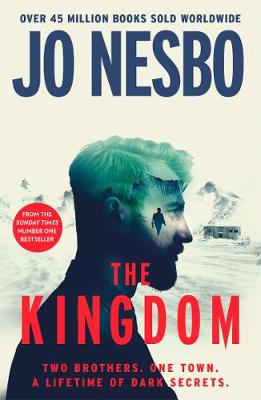 10% offPaperback
The Kingdom also appears in these Categories: