The Language of Thieves: The Story of Rotwelsch and One Family's Secret History

Since the Middle Ages, vagrants and thieves in Central Europe have spoken Rotwelsch, a secret language influenced by Yiddish and written in rudimentary signs. When Martin Puchner inherited a family archive, it led him on a journey into this extraordinary language but also into his family's connections to the Nazi Party, for whom Rotwelsch held a particular significance. A riveting story of the mindset and milieu of Central Europe and of the way language can be used to evade oppression, The Language of Thieves is also a deeply moving reckoning with a family's buried past. 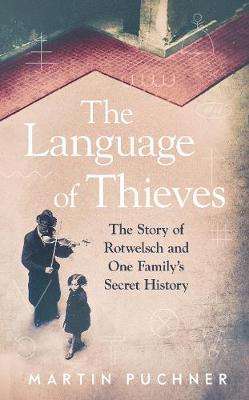 Hardback
The Language of Thieves: The Story of Rotwelsch and One Family's Secret History also appears in these Categories:

How to Make Anything Gluten Free
Becky Excell
€24.10

A Coup in Turkey: A Tale of Democracy, Despotism and Vengeance in a Divided Land
Jeremy Seal
€20.45

Queens of Jerusalem: The Women Who Dared to Rule
Katherine Pangonis
€24.10

That One Patient: Doctors' and Nurses' Stories of the Patients Who Changed Their
Ellen de Visser
€18.05

We Are Bellingcat
Eliot Higgins
€24.10

How Wild Things Are: Cooking, fishing and hunting at the bottom of the world
Analiese Gregory
€26.50

How to be Sad
Helen Russell