The Lives of Eoin MacNeill: The pen and the sword

Eoin MacNeill (1867-1945) was a founding figure in the Gaelic League, the Irish Volunteers, and the government of Ireland. As Professor of Early (including Mediaeval) History at University College Dublin was also one of the foremost Irish historians of his generation. As a professor, a politician, and the leader of a paramilitary organisation, MacNeill fused scholarship and activism into a complex life that both followed and led the course of Irish independence from gestation to maturation. MacNeill is arguably best known as the man who tried to stop the 1916 Rising. However, as this book shows, as a newspaper editor, a language teacher, a historian, a paramilitary leader, a parliamentarian, a convict, and a cabinet minister, he crafted both the ideas and institutions of his own time while revising scholarly understandings of the society and institutions of medieval Ireland through his teaching and writings. MacNeill was also a political theorist and even a propagandist who moulded the Irish-Ireland and Sinn Fein movements through his writings and his oratory. A supporter of the Anglo-Irish Treaty and the Free State's first minister for education, MacNeill lost his son Brian who was killed fighting on the anti-Treaty side of Ireland's Civil War. After independence, MacNeill was centrally involved in the attempt to redraw the Irish border in his role as the Free State's representative on the Irish Boundary Commission. Its collapse took MacNeill's political career down with it and he reverted to his passion for scholarship, drafted his memoirs, founded the Irish Manuscripts Commission, and delivered a landmark lecture tour in the United States. While he received adulation as a scholar in his last years, his contribution to politics and state formation was variously marginalised and maligned, a pattern that persisted in the decades after his death. This collection confronts the complexities and apparent contradictions of MacNeill's life, work, and ideas. It explores the ways in which MacNeill's activities and interests overlapped, his contribution to the Irish language and to Irish history, his evolving political outlook, and the contribution he made to the shaping of modern Ireland. 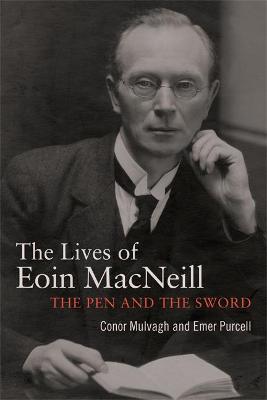 Hardback
The Lives of Eoin MacNeill: The pen and the sword also appears in these Categories: