The Name of All Things

Prophesy and magic combine in The Name of All Things, Jenn Lyons' powerful epic of imperial politics, dragons, gods and demons. You can have everything you want. If you sacrifice everything you believe . . . Kihrin D'Mon is a wanted man after killing the Emperor of Quur - and not in a good way. So he heads for Jorat, to find the fourth person named in prophesy, who will either save or damn the world. He meets Janel Theranon, who claims she already knows him. And she wants Kihrin's help in saving Jorat's capital from a dragon, who can only be slain with his sword's magic. Unwittingly, Kirin also finds himself at the centre of a rebellion. One which puts him in direct opposition to Relos Var, his old enemy. For too long, Janel's battled the wizard alone - even betraying her ideals to bring him down. However, Var owns one of the world's most powerful artefacts: the Name of All Things. It bestows knowledge, which Var uses to gain what he wants most. This is now Kihrin D'Mon - and the world may not survive the consequences. The Name of All Things is book two in Jenn Lyons' thrilling epic fantasy series, A Chorus of Dragons, which began with The Ruin of Kings. 'What an extraordinary book . . . everything epic fantasy should be: rich, cruel, gorgeous, brilliant, enthralling and deeply deeply satisfying. I loved it' - Lev Grossman on The Ruin of Kings 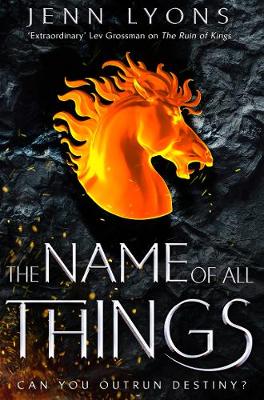 Paperback
The Name of All Things also appears in these Categories: