The Only Plane in the Sky: The Oral History of 9/11 on the 20th Anniversary

THE NEW YORK TIMES BESTSELLER "Incredibly evocative and compelling." - The Washington Post "The most moving and chilling oral history you will read." - The Times "Astonishing book about an astonishing, terrifying atrocity, relived in real time by those who were there. I read it in one sitting & was utterly gripped from start to finish." - Piers Morgan "The most vivid portrait of 9/11 I've ever read."- Mike Morell, former deputy director of the CIA ** Updated 20th Anniversary edition with additional content ** The Only Plane in the Sky is the first comprehensive oral history of 9/11, deftly woven and told in the voices of ordinary people grappling with extraordinary events. It begins predawn, where we meet airport staff who unknowingly usher terrorists onto their flights. From a secret bunker beneath the White House, Dick Cheney and Condoleezza Rice watch for incoming planes on radar. At the Pentagon, officials feel a violent tremor as they come under attack. We hear the stories of the father and son working on separate floors in the North Tower; the firefighter who rushes there to search for his wife; the phone operator who keeps her promise to share a passenger's last words with his family; the chaplain who stays on the scene to perform last rites, losing his own life when the Twin Towers collapse. In New York, first responders confront a scene of unimaginable chaos. At the Pentagon generals break down and weep when they are barred from rushing into the burning building to try and rescue their colleagues. Drawing on never-before-published transcripts, declassified documents and interviews from nearly five hundred people, award-winning historian Garrett Graff skilfully tells the story of the day that changed all of our lives - as it was lived. The Only Plane in the Sky is a unique, profound, and searing exploration of humanity on a day that changed the course of history, and all of our lives, 20 years ago. 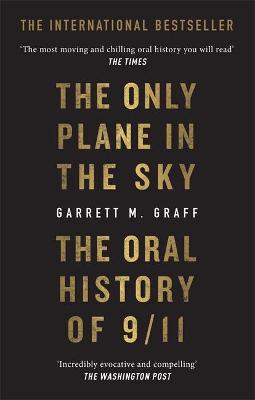 Paperback
The Only Plane in the Sky: The Oral History of 9/11 on the 20th Anniversary also appears in these Categories: