The Power of Women

'These women are each a light and an inspiration, demonstrating how the best instincts of humanity - to love, to share, to protect others - can triumph in the worst possible circumstances.' Nobel laureate, world-renowned doctor and human rights activist Dr Denis Mukwege has dedicated his life to caring for and treating survivors of sexual violence, as the founder of the Panzi hospital in the Democratic Republic of Congo which specialises in injuries caused by rape. This book is a compelling and inspiring call-to-action to combat the scourge of violence against women, and to better learn from their resilience, strength and power. Congo, with its tumultuous history of exploitation and conflict, has experienced a spiral of unprecedented and incomprehensible violence for the past two decades. Set against the backdrop of his war-torn country, Mukwege tells of the extraordinary women whose lives have been devastated by sexual violence and abuse, but who have survived, healed, bought land, started businesses, and helped to rebuild their shattered communities. They are the heroines of the book. The truth is that, through the intricate ties of the global economy, we are all implicated in violence against women - whether it occurs amidst the fighting in the Democratic Republic of Congo or on university campuses in the West. Building more inclusive, gender-balanced societies will require not only a systemic change in male behaviour but a world-wide effort to break down the taboos surrounding assault. Dr. Mukwege's writing addresses men directly, encouraging and guiding them to speak out and join the struggle, rather than leave women to fight the battle alone. For Dr Mukwege, 'emotion without action is pointless'. The Power of Women is an impassioned plea for all of us to say 'no' to indifference.

Despatched after 02/11/21. A separate order should be placed for this item. If you order this along with other items, your entire order will be held and despatched when complete. 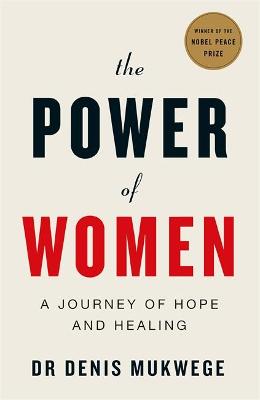 Paperback
The Power of Women also appears in these Categories:

What White People Can Do Next: From Allyship to Coalition
Emma Dabiri
Paperback
€9.85

How To Be an Antiracist
Ibram X. Kendi
Hardback
€20.45

Natives: Race and Class in the Ruins of Empire
Akala
Paperback
€11.10

16% off
A Sociology of Ireland 4th Edition
Perry Share
Paperback
€49.99

The Beginner's Guide to Being A Trans Ally
Christy Whittlesey
Paperback
€12.35

The Dawn of Everything: A New History of Humanity
David Graeber
Hardback
€37.05