The Secret Political Adviser: The Unredacted Files of the Man in the Room Next D

This hilarious journal contains satirical advice to politicians ranging from Boris Johnson to Kim Jong-un, from The Man in the Room Next Door Just who is the secret political adviser calling himself The Man in the Room Next Door? No one knows. We don't even know his name. But now the lid is about to be blown clean off, because the secret files of the world's most influential* political media adviser are published in this book. Packed with letters, memos, texts, tweets, emails, journal entries, leaked documents and crude doodles, these pages will reveal who The Man in the Room Next Door is and, more importantly, his thoughts on those who employ his services, including Donald 'dangerous puffin' Trump, Boris 'posh motorboat' Johnson and some of their least competent colleagues. This book is the evidence that anyone can be a world leader. Just as long as they're wearing the right earpiece. *fictional 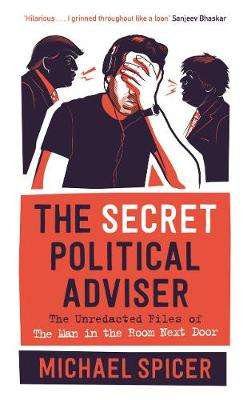 Hardback
The Secret Political Adviser: The Unredacted Files of the Man in the Room Next D also appears in these Categories:

17% off
How to (Almost) Make Friends on the Internet
Michael Cunningham
€9.99

Seven Kinds of People You Find in Bookshops
Shaun Bythell
€9.65

The Problem with Men
Richard Herring
€15.65

Father-Ish: Laugh-Out-Loud Tales from a Dad Trying Not to Ruin His Kids' Lives
Clint Edwards
€15.65

The Ultimate Bucket List: 50 Buckets You Must See Before You Die
Dixe Wills
€12.05