The War for Kindness: Building Empathy in a Fractured World

'In this masterpiece, Jamil Zaki weaves together the very latest science with stories that will stay in your heart forever' - Angela Duckworth, author of Grit 'Scientific, gripping, groundbreaking and hopeful. The War for Kindness is the message for our times' - Carol Dweck, author of Mindset Empathy has been on people's mind a lot lately. Philosophers, evolutionary scientists and indeed former President Obama agree that an increase in empathy could advance us beyond the hatred, violence and polarization in which the world seems caught. Others disagree, arguing it is easiest to empathize with people who look, talk or think like us. As a result, empathy can inspire nepotism, racism and worse. Having studied the neuroscience and psychology of empathy for over a decade, Jamil Zaki thinks both sides of this debate have a point. Empathy is sometimes an engine for moral progress, and other times for moral failure. But Zaki also thinks that both sides are wrong about how empathy works. Both scientists and non-scientists commonly argue that empathy is something that happens to you, sort of like an emotional knee-jerk reflex. Second, they believe it happens more to some people than others. This lines people up along a spectrum, with deep empaths on one end and psychopaths on the other. What's more, wherever we are on that spectrum, we're stuck there. In The War for Kindness, Zaki lays out a very different view of how empathy works, one that breaks these two assumptions. Empathy is not a reflex; it's a choice. We choose empathy (or apathy) constantly: when we read a tragic novel, or cross the street to avoid a homeless person, or ask a distraught friend what's the matter. This view has crucial consequences: if empathy is less a trait (like height), and more a skill (like being good at word games), then we can improve at it. By choosing it more often, we can flex our capabilities and grow more empathic over time. We can also "tune" empathy, ramping it up in situations where it will help and turning it down when it might backfire. Zaki takes us from the world of doctors who train medical students to empathise better to social workers who help each other survive empathising too much. From police trainers who help cadets avoid becoming violent cops to political advocates who ask white Americans to literally walk a (dusty) mile in Mexican immigrants' shoes. This book will give you a deepened understanding of how empathy works, how to control it and how to become the type of empathiser you want to be. 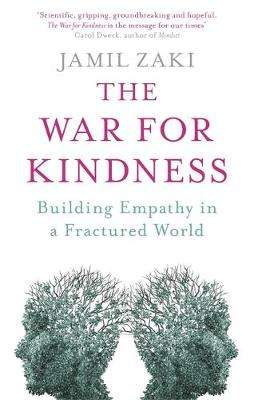 Paperback
The War for Kindness: Building Empathy in a Fractured World also appears in these Categories:

The Chimp Paradox: How Our Impulses and Emotions Can Determine Success and Happi
Steve Peters
€15.65

17% off
Hearing Voices: The History of Psychiatry in Ireland
Brendan Kelly
€29.95

Blink - The Power of Thinking without Thinking
Malcolm Gladwell
€12.05

Friends: Understanding the Power of our Most Important Relationships
Robin Dunbar
€18.05