The World the Railways Made

Across American prairies, through Siberian tundra, over Argentinian pampas and deep into the heart of Africa, the modern world began with the arrival of the railway. The shock was sudden and universal: railways carried empire, capitalism and industrialization to every corner of the planet. For some, the 'Iron Road' symbolized the brute horrors of modernity; for others the way toward a brighter future. From 1825, when the first passenger service linked Stockton and Darlington to the outbreak of World War I, Nicholas Faith presents an engaging and entertaining journey through the first century of rail, introducing visionaries, engineers, surveyors, speculators, financiers and navvies - the heroes and the rogues of the mechanical revolution that turned the world upside down. The railway was the most important invention of the 19th Century, and THE WORLD THE RAILWAYS MADE argues that in the 21st Century, with high speed lines that can compete with air travel and over 190 metro systems in 54 countries underpinning the world's greatest cities, it remains just as relevant. 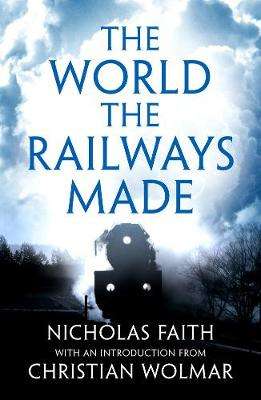 Paperback
The World the Railways Made also appears in these Categories:

Hop, Skip, Go: How the mobility revolution will transform our lives and our plan
John Rossant
€18.05

JOURNEY TO THE EDGE
Enda O'Coineen

How Not to Be a Professional Racing Driver
Jason Plato
€18.05

2.5% off
GQ Drives: A Stylish Guide to the Greatest Cars Ever Made
Jenson Button
€29.75

Fins: Harley Earl, the Rise of General Motors, and the Glory Days of Detroit
William Knoedelseder
€15.65

Formula One Circuits From Above
Bruce Jones
€30.85

2.5% off
The Railway Navvies: A History of the Men who Made the Railways
Terry Coleman
€11.90