The Adventures of an Irish Antarctic Hero
The frozen land of Antarctica is not for ordinary people but Tom Crean was no ordinary man. When he was 15 he ran away from home to join the navy. His next step into the unknown took him to the Antarctic when he spent even more time than the famous explorers Scott or Shackleton.
Going to the Antarctic 100 years ago was like going to Jupiter today. Explorers were cut off for years, 1000's of miles from the nearest outpost. Temperatures plunged far below zero.
As reviewed by Luke, 6th Class, for World Book Day 2009
Tom Crean was an Irish man who came from a village named Annascaul in Co. Kerry. He went on three trips to the Antarctic, which tested his strength and courage. I thought it was a very exciting book that should be made into a movie. I would give it ten out of ten.

As reviewed by Adam, 5th Class, for World Book Day 2009
The book I read was Tom Crean The Ice Man. Tom Crean was a famous man after he went to Antarctica. He went there a couple of times. Tom opened a pub called The South Pole Inn. Tom's dog had four puppies. They were black and white. 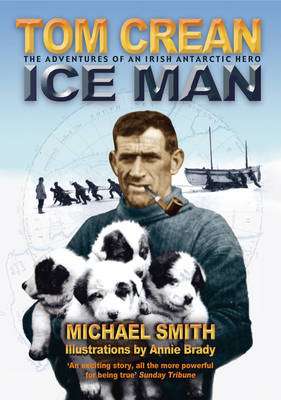