Shortlisted for the An Post Irish Book Awards Ireland AM Popular Non-fiction Book of the Year Award for 2018.

Tony 10 was the online betting username of Tony OReilly, the postman who became front-page news in 2011 after he stole 1.75 million from An Post while he was a branch manager in Gorey. He used the money to fund a gambling addiction that began with a bet of 1 and eventually rose to 10 million, leading to the loss of his job, his family, his home - and winning him a prison sentence.

From the heart-stopping moments in a hotel room in Cyprus with his wedding money riding on the Epsom Derby, to the euphoria of winning half a million over a weekend, to the late goals and the horses falling at the last fence, Tony 10 is the story of an ordinary mans journey from normality to catastrophe. At times, he vowed to get out while he was ahead, only to be taken by another surge of adrenaline, falling deeper and deeper into a compulsion that consumed his life. His disappearance on the morning the fraud was discovered led to a surreal three days on the run in Northern Ireland, and ultimately his arrest, conviction and sentencing to four years in jail.

Tony 10 is a mesmerising story of the secret life of a pathological gambler - as well as the most compelling account yet of the damage wrought by the online gambling industry. 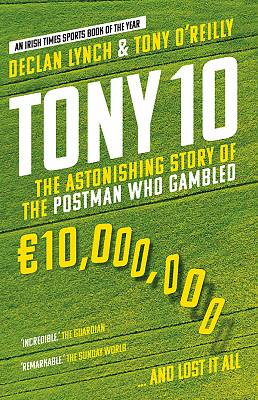 25% off
After the Storm
Damian Lawlor
Trade Paperback
€15.99

20% off
Olympic Titanic Britannic: The anatomy and evolution of the Olympic Class
Simon Mills
Hardback
€25.00

20% off
Point to Point: The Heart of Irish Horse Racing
Pat Healy
Hardback
€19.99