Top Five Regrets of the Dying: A Life Transformed by the Dearly Departing

'Bronnie's work is a gift to the world. Her revelations on living regret-free are a continued source of inspiration. They fuel me to stay focused on what truly matters most.' - Marie Forleo, creator of MarieTV and author of Everything Is Figureoutable Based on the blog post that reached 8 milion readers. After too many years of unfulfilling work, Bronnie Ware began searching for a job with meaning. Despite having no formal qualifications or experience, she found herself working in palliative care. During the time she spent tending to the needs of those who were dying, Bronnie's life was transformed. Later, she wrote a blog post about the most common regrets that the people she had cared for had expressed to her. The post, also called 'The Top Five Regrets of the Dying', has been read millions of times all over the world since it was first published. By applying the lessons of those nearing their death to her own life, Bronnie developed an understanding that it is possible for everyone, if they make conscious choices, to die with peace of mind. Bronnie's delightful memoir is a courageous, life-changing book that will leave you feeling more compassionate and inspired to live the life you are truly here to live. 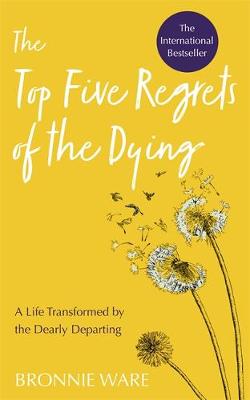 Paperback
Top Five Regrets of the Dying: A Life Transformed by the Dearly Departing also appears in these Categories:

Group: How One Therapist and a Circle of Strangers Saved My Life
Christie Tate

Waiting for the Last Bus: Reflections on Life and Death
Richard Holloway
€12.20

Please Yourself: How to Stop People-Pleasing and Transform the Way You Live
Emma Reed Turrell
€15.85

Pregnancy After Loss: A day-by-day plan to reassure and comfort you
Zoe Clark-Coates
€18.30

Loving You From Here: Stories of Grief, Hope and Growth When a Baby Dies
Susan Clark
€20.45

7% off
Tell Me The Truth About Loss
Niamh Fitzpatrick
€16.99