When Mckinsey Comes To Town

An explosive exposé of McKinsey & Company - the world's largest, most prestigious, most successful management consultancy - revealing its shady practices, its insidious influence on global business and government, and its terrible impact on employees and citizens around the world.

McKinsey earns billions for its advice on enhancing efficiency and maximising profit, and has worked for 80 per cent of the companies in the Fortune 500 - basically every major corporation in the world - and countless governments and militaries, including our own. But, shielded by NDAs, McKinsey has escaped public scrutiny - until now.

In When McKinsey Comes to Town, prize-winning investigative journalists Walt Bogdanich and Michael Forsythe show how the company's advice often boils down to major cost-cutting, including redundancies and maintenance reductions, to drive-up short-term profits, boosting the stock price and the wealth of the executives who hire them at the expense of workers and safety measures. Some of McKinsey's other work has included incentivising the most prolific and lax prescribers of opioids to prescribe more of them, and executing Trump's immigration policies; the ones that resulted in children being separated from their parents and held in cages.

Bogdanich and Forsythe have penetrated the veil of secrecy surrounding McKinsey by conducting hundreds of interviews, obtaining tens of thousands of revelatory documents and following rule number one of investigative reporting: follow the money. When McKinsey Comes to Town is a devastating portrait of a firm whose work has often made the world more unequal, more corrupt and more dangerous. 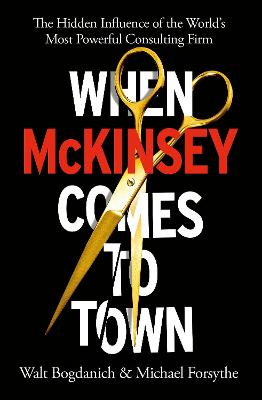 Paperback
When Mckinsey Comes To Town also appears in these Categories:

The Solutionists: How Businesses Can Fix the Future
Solitaire Townsend
Paperback
€12.50

Share Power: Why the financial system should work for everyone: and how YOU have
Merryn Somerset Webb
Paperback
€13.75

I Am My Brand: How to Build Your Brand Without Apology
Kubi Springer
Paperback
€13.75

How to Work Without Losing Your Mind
Cate Sevilla
Paperback
€13.75