WHERE ONCE WE STOOD: STORIES OF THE APOLLO ASTRONAUTS WHO WALKED ON THE MOON

Released in July 2019 for the 50th anniversary of the first Moon landing "Where Once We Stood" captures the first-hand accounts of an extraordinary chapter in our history, when twelve human beings set foot upon the Moon. Combining a unique series of illustrations with the words spoken by the astronauts on the lunar surface, this book offers a rare insight into what it really felt like to live and work on another world; something that those who'd experienced it often found hard to convey. The author Christopher Riley has spent a lifetime studying the Apollo project and interviewing many of the astronauts, their friends and families. In this special collaboration, he's joined forces with artist Martin Impey, whose paintings of the missions have been credited by the astronauts themselves, as capturing the essence of their lunar encounters. The resulting book brings a new dimension to the timeless story of Apollo's extraordinary adventures on the Moon. From the first footprints left by Neil and Buzz during their pioneering walk on the Sea of Tranquility, to the final ambitious expeditions - as astronauts drove an electric car deep into the mountains of the Moon, this is a revealing record of what it truly meant to explorer a place beyond Earth - where once we stood. Reviews: Library Girl and Book Boy says: "This large-scale book is a glorious collection of first-hand accounts from those involved in successfully enabling 12 people to walk on the moon between July 1969 and December 1972. A combination of extensive interviews with the astronauts themselves and transcripts of conversations held on the moon, Riley has created a fascinating story to accompany Impey's much-celebrated paintings." Books for Topics says: "The language throughout is a glorious blend of the poetic and the scientific, the prosaic and the profound. The illustrations by Martin Impey are breath-taking and alone make the book worth purchasing." 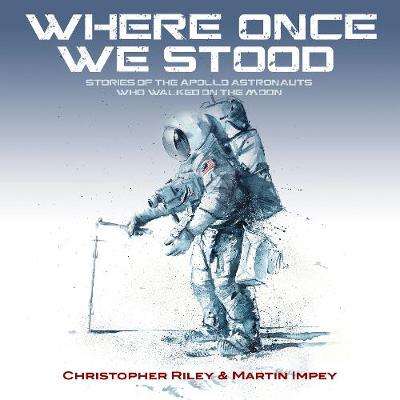 5% offPaperback
WHERE ONCE WE STOOD: STORIES OF THE APOLLO ASTRONAUTS WHO WALKED ON THE MOON also appears in these Categories: