Beauty an Oileain: Music & Song of the Blasket Islands

This limited edition book and CD set commemorates and preserves the music and song of The Blasket Islands  a collection of islands nestled in the Atlantic Ocean off the coast of Co. Kerry, the most south-westerly point of Ireland.

The Blasket Islands are famous the world over because of three books:An tOileánach,Fiche Blian ag Fás andPeig  the latter of which will likely cause a stir of nostalgia in anyone who remembers studying the autobiographical book as part of their Leaving Certificate curriculum from the 1960s to the 1990s.

Originally released on CD in 1992 on Claddagh Records,Beauty an Oileáin included a selection of 17 tracks of music, song and spoken word from formerBlasket Islanders and their descendants. At the time, number of audio sources became available and were collated by renownedIrish folklorist and former director of the National Folklore Collection at University College Dublin,Ríonach uí Ógáin from her own field recordings, Radio Éireann recordings and the National Folklore Collection. The bulk of the audio material was recorded on reel-to-reel magnetic tape.

Since 1992, additional archival recordings have come to light and are included in this new release. Also included are new recordings made in 2020 of descendants of Blasket Islanders who continue to sing and make music. These include sisters Aoife and Deirdre Granville from Dingle. Aoife and Deirdre spent a great deal of time with their grandmother, Léan Ní Dhálaigh, and this led to their love of, and interest in, Island culture. They have been particularly influenced by Dálaighs music and that of Tom na hInise or Tom Pheaidí Mhuiris. Róisín Ní Chéileachair is from Dún Chaoin. At present, she works with Raidió na Gaeltachta in Corca Dhuibhne. Since childhood, she has been singing and acting and she continues to pursue these a great deal. She is a descendant of the Ó Dálaigh family who first heard Port na bPúcaí on Inis Mhic Aoibhleáin and brought it with them when they left the island. 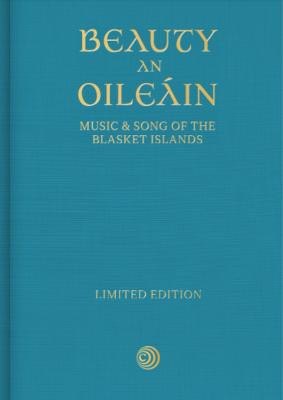 Mixed Media
Beauty an Oileain: Music & Song of the Blasket Islands also appears in these Categories:

The Book of the Skelligs
John Crowley
Hardback