Collins Gem Babies Names is number one in the best-selling stakes. Meet its Irish cousin! This detailed guide to over 2000 of the most popular Irish first names is the ideal gift for anyone wishing to choose an Irish name for their child, or is interested in finding out a bit more about their own name. This Collins Gem is being reissued in paperback.
The stylish new cover style and new text design will enliven this and other best-selling Gems. Irish names are spreading across the world. As well as being more common in Ireland, they now feature in most English-speaking countries of the world.
The reason for this spread is not hard to find. Massive emigration, especially during the 19th century famines, left many people of Irish descent in Britain, the USA, Canada and Australia. These emigrants often had to give up the Irish language in favour of English, but they took their names with them, gave them to their children and spread them in the new countries.
Indeed some, such as Brian, are now so well-established that they are no longer considered Irish. Others have developed strong associations with their new countries, so that Oscar is sometimes thought of as Scandinavian, Barry and Sheila are associated with Australia, and for most people Darren is American. What then is an Irish name? In this book a very broad view is taken, with special attention paid to what has happened to names after they left Ireland.
The names come from Gaelic (and are given in Gaelic and in an anglicised form), from translations from Irish forms of non-Irish names and from Irish surnames and words. Over 2000 names included. Features names derived from the Irish language, anglicized versions of Irish names, and Irish names used in the USA and Australia.
Meaning, origin and pronunciation guide given for each name. This edition has been redesigned in the new Gem style both internally and with a new cover design. 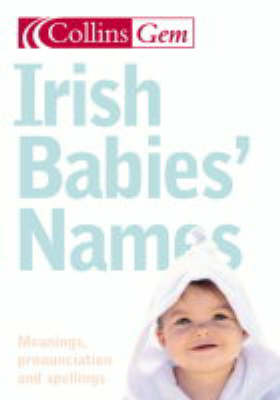 The Irish Dad's Survival Guide to Pregnancy [& Beyond]
David Caren
€14.99

How to Grow Up and Feel Amazing!: The No-Worries Guide for Boys
Dr Ranj Singh
€12.20

Book You Wish Your Parents Had Read
Philippa Perry
€12.20

Brilliant Questions About Growing Up: Simple Answers About Bodies and Boundaries
Amy Forbes-Robertson
€10.95

What To Expect The First Year 3rd Edition
Heidi Murkoff
€20.70