The Churchill Complex: The Curse of Being Special, from Winston and FDR to Trump

'Rich and rewarding' Wall Street Journal It is impossible to understand the last 75 years of British and American history without understanding the Anglo-American relationship, and specifically the bonds between presidents and prime ministers. FDR of course had Churchill; JFK famously had Macmillan, his consigliere during the Cuban Missile Crisis. Reagan found his ideological soul mate in Thatcher, and George W. Bush found his fellow believer, in religion and in war, in Tony Blair. In a series of shrewd and absorbing character studies, Ian Buruma takes the reader on a journey through the special relationship via the fateful bonds between president and prime minister. It's never been a relationship of equals: from Churchill's desperate cajoling and conniving to keep FDR on side, British prime ministers have put much more stock in the relationship than their US counterparts did. For Britain, resigned to the loss of its once-great empire, its close kinship to the world's greatest superpower would give it continued relevance, and serve as leverage to keep continental Europe in its place. As Buruma shows, this was almost always fool's gold. And now, as the links between the Brexit vote and the 2016 US election are coming into sharper focus, it is impossible to understand the populist uprising in either country without reference to Trump and Boris Johnson, though ironically, they are also the key, Buruma argues, to understanding the special relationship's demise. 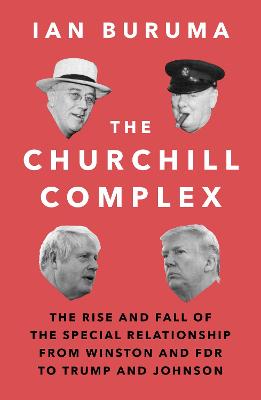 21% offPaperback
The Churchill Complex: The Curse of Being Special, from Winston and FDR to Trump also appears in these Categories:

25% off
Colditz: Prisoners of the Castle
Ben MacIntyre
Trade Paperback
€13.99

33% off
Revolution at the Waldorf: America and the Irish War of Independence: 2022
Patrick O'Sullivan Greene
Paperback
€16.00

20% off
Aftermath: Life in the Fallout of the Third Reich
Harald Jahner
Paperback
€11.00

20% off
Leadership: Lessons from a Life in Diplomacy
Simon McDonald
Hardback
€19.99

20% off
The Burgundians: A Vanished Empire
Bart Van Loo
Paperback
€11.99

20% off
Curtain and the Wall
Timothy Phillips
Hardback
€19.99

20% off
Borderland: A Journey Through the History of Ukraine
Anna Reid
Paperback
€11.00

20% off
The Library: A Fragile History
Arthur der Weduwen
Paperback
€11.00

20% off
In the Shadow of the Empress
Nancy Goldstone
Paperback
€11.00

20% off
The Making of the Modern Middle East: A Personal History
Jeremy Bowen
Trade Paperback
€17.00

20% off
The Story of Russia
Orlando Figes
Trade Paperback
€15.00

20% off
A Short History of Russia
Mark Galeotti
Paperback
€10.00

20% off
Speeches That Changed the World
Quercus
Paperback
€10.00