It's Dublin, June 1995, the hottest summer since records began. But Billy Sweeney, a middle-aged salesman with a failed marriage, a faltering career and a tumbledown house, has more than weather on his mind. His youngest daughter lies in a coma in hospital following a mysterious attack on the petrol station where she worked. Devastated by the unfolding consequences of that hot, violent night, frustrated by officialdom and failed by the system, Billy finally tires of seeking legal justice. He decides to take the law into his own hands. . . 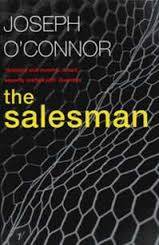 Paperback
The Salesman also appears in these Categories:

A Girl Is a Half-formed Thing
Eimear McBride
€10.85

18% off
The Liberation of Brigid Dunne
Patricia Scanlan
€7.99

Letters to My Daughters
Emma Hannigan
€9.65