The Surnames of Ireland 6th Edition

Ireland was one of the earliest countries to evolve a system of hereditary surnames. More than 4,000 Gaelic, Norman and Anglo-Irish surnames are listed in this book, giving a wealth of information on the background and location of Irish families. Edward MacLysaght was a leading authority on Irish names and family history. He served as Chief Herald and Genealogical Officer of the Irish Office of Arms. He was also Keeper of Manuscripts of the National Library of Ireland and was Chairman of the Manuscripts Commission. This book, which was first published in 1957 and now is in its sixth edition, is being reprinted for the fourth time and remains the definitive record of Irish surnames, their genealogy and their origins. 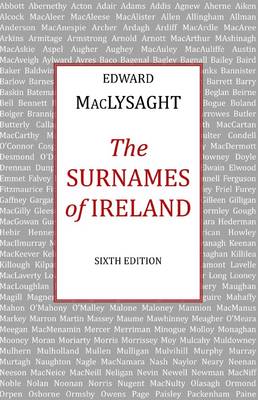 Paperback
The Surnames of Ireland 6th Edition also appears in these Categories: