The Voice of Anfield: My Fifty Years with Liverpool FC

'George Sephton is part of the brickwork of Liverpool Football Club and was witness to so many iconic moments. He has lived through a huge chunk of our history, from when Liverpool were in the Second Division, when he used to come to Anfield with his father, all the way to being crowned World Club and Premier League champions. It's been a rollercoaster ride, and George has been there for all the ups and downs - but mainly the ups.' Sir Kenny Dalglish 'The voice of George Sephton has been heard at Anfield for so long that you could be forgiven for imagining him poised with a wind-up gramophone and a 78-rpm record of Gerry with his ukulele and a single Pacemaker, on a comb and tissue paper, piping Alan A'Court and Alf Arrowsmith onto the field.' Elvis Costello George Sephton's relationship with Liverpool Football Club began in 1971 when he wrote to the club secretary applying to be the stadium announcer. His first match also marked the debut of Kevin Keegan. For the past fifty years, Sephton has been at Anfield for all but a handful of home fixtures, as well as travelling with the team to major finals. From the highs of winning numerous league titles and European Cups, to the lows of Heysel and Hillsborough, Sephton has been with Liverpool through it all. From encounters with great managers and legendary players - from Bill Shankly to Kenny Dalglish, John Barnes to Jurgen Klopp, he tells his unique and entertaining story of the greatest club in the world. 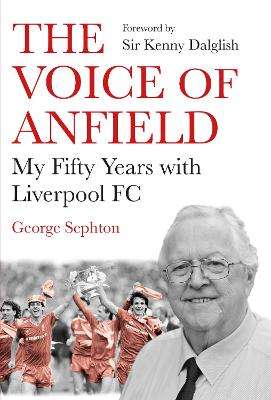 Hardback
The Voice of Anfield: My Fifty Years with Liverpool FC also appears in these Categories: