'Freewheeling frivolity' - Financial Times 'Once, and once only, there was a boy whose name was Fizzlebert.' Fizzlebert Stump lives in a circus. His mum's a clown, his best friend is a bearded boy, and he sticks his head in a lion's mouth every night. Other than that, he's pretty normal. When Fish the sea lion goes missing Fizzlebert tracks down the runaway beast to an Aquarium, which has problems of its own. Fish (not Fish the sea lion, fish. Keep up.) are going missing, and the Admiral blames the circus. Can Fizzlebert solve the mystery, avoid an over-enthusiastic crocodile, and find his friend? The story of a boy, a lion, a sea lion, fish (but fewer than there used to be), a possible pirate, a temperamental cook and a very surprising octopus. 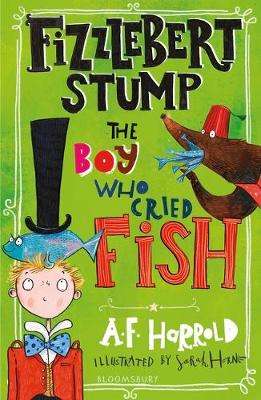 Paperback
Fizzlebert Stump: The Boy Who Cried Fish also appears in these Categories:

Lori and Max and the Book Thieves
Catherine O'Flynn
€8.40

The Wizard In My Shed: The Misadventures of Merdyn the Wild
Simon Farnaby
€11.99

Amelia Fang and the Trouble with Toads
Laura Ellen Anderson
€8.40

The Beast and the Bethany
Jack Meggitt-Phillips
€8.40

The Naughtiest Unicorn and the Spooky Surprise
Pip Bird
€7.20

It's a Prince Thing (The Princess Rules)
Philippa Gregory
€15.65

Squishy McFluff: On with the Show
Pip Jones
€8.40