The worl-famous GiantŽs Causeway (irish: Chlochán an Aifir) on the County Antrim coast is an amazing formation of around 40.000 interlocking basalt columns arising from the sea. Hexagonal in shape and somre rising to 12 metres in height, they were created by rapidly cooling lava from a volcanic eruption 60 million years ago.

Nearby is the breathtaking Carrick-a-Rede Rope Bridge, wich was built by salmon fishermen in 1755 to connect Carrick Island with the mainland. The bridge is 20 metres long and sways 30 metres above the ocean. Crossing it is both thrilling and nervewracking.

Also close to the GiantŽs Causeway, on the sheer cliffs east of Portrush, is the spectacular Dunluce Castle. Built around 1500 and the site of incredible battles, it is location for Castle Greyjoy in Game of Thrones.

Suitable for all ages and fun for all the family. 50 x 34 cm. Illustrated by Courtney Davis. Made in Ireland. 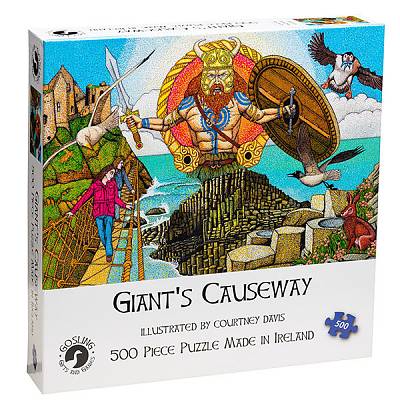