When a depressed, alcoholic single mother disappears, everything suggests suicide, but the discovery of a body on the Icelandic lava fields changes everything, and Detective Elma and her team are thrust into a perplexing, chilling investigation ... Book two in the gripping, award-winning Forbidden Iceland series.

When single mother Maríanna disappears from her home, leaving an apologetic note on the kitchen table, everyone assumes that shes taken her own life ... until her body is found on the Grábrók lava fields seven months later, clearly the victim of murder. Her neglected fifteen-year-old daughter Hekla has been placed in foster care, but is her perfect new life hiding something sinister?

Fifteen years earlier, a desperate new mother lies in a maternity ward, unable to look at her own child, the start of an odd and broken relationship that leads to a shocking tragedy.

Police officer Elma and her colleagues take on the case, which becomes increasingly complex, as the number of suspects grows and new light is shed on Maríannas past  and the childhood of a girl who never was like the others...

Breathtakingly chilling and tantalisingly twisty, Girls Who Lie is at once a startling, tense psychological thriller and a sophisticated police procedural, marking Eva Björg Ægisdottir as one of the most exciting new names in crime fiction. 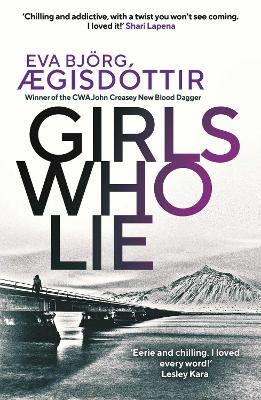 Paperback
Girls Who Lie also appears in these Categories:

The Couple at No 9
Claire Douglas
Paperback
€9.85