Legacy of Ash: Book One of the Legacy Trilogy

'A hugely entertaining debut' John Gwynne 'Epic fantasy as it should be; big, bold and very addictive' Starburst 'A great romp in a brilliantly realised setting . . . I have lost sleep, forgotten food and made this the thing I pick up every moment I can get' SFFWorld A shadow has fallen over the Tressian Republic. Ruling families plot against one another with sharp words and sharper knives, heedless of the threat posed by the invading armies of the Hadari Empire. The Republic faces its darkest hour. Yet as Tressia falls, heroes rise. Game of Thrones meets the Last Kingdom in Matthew Ward's Legacy of Ash - an unmissable epic fantasy debut of vicious intrigue, ancient magic and the eternal clash of empires. 'Incredible action scenes' Fantasy Hive 'Magnificent and epic' Grimdark magazine 'An impressive series opener' Publishers Weekly (starred review) The Legacy Trilogy Legacy of Ash Legacy of Steel (November '20) Legacy Book Three (August '21) 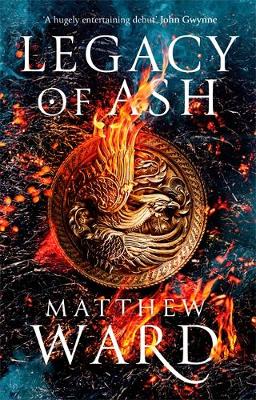 Paperback
Legacy of Ash: Book One of the Legacy Trilogy also appears in these Categories: