Moondust: In Search of the Men Who Fell to Earth

'It left me spellbound ... belongs to the same tradition as Tom Wolfe's The Right Stuff' Sunday Times 'Fascinating. A wonderful book' David Bowie A revised and updated edition of the classic work to commemorate the fiftieth anniversary of the first moon landing The Apollo Moon Programme has been called the last optimistic act of the twentieth century. In Moondust, Andrew Smith set out to find and interview the nine remaining Moonwalkers in order to learn how their lives, and ours, were irrevocably changed by this surreal expedition. On the fiftieth anniversary of the first moon landing, Smith's powerful and gripping account of the most courageous adventure of the last century is re-released with a new chapter, detailing his fascinating interactions with Neil Armstrong, Buzz Aldrin, Edgar Mitchell and Alan Bean in the years since publication. With thought-provoking meditations on the dramatic recent upswing in cosmic exploration, including astonishing encounters with the would-be astronaut-settlers of the Mars One project and the scientists leading the search for life in our solar system, this is an indispensable update to the definitive classic. 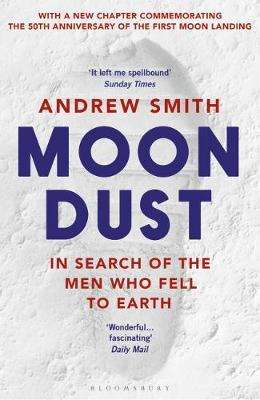 2.5% offPaperback
Moondust: In Search of the Men Who Fell to Earth also appears in these Categories:

5% off
WHERE ONCE WE STOOD: STORIES OF THE APOLLO ASTRONAUTS WHO WALKED ON THE MOON
Christopher Riley
€23.80