Novacene: The Coming Age of Hyperintelligence

SUNDAY TIMES BESTSELLER The creator of the Gaia hypothesis and the greatest environmental thinker of our time has produced an astounding new theory about the future of life on Earth. James Lovelock argues that the anthropocene - the age in which humans acquired planetary-scale technologies - is, after three centuries, coming to an end. A new age - the novacene - has already begun. New beings will emerge from existing artificial intelligence systems. They will think 10,000 times faster than we do and will regard us as we now regard plants. The cruel, violent machine takeover imagined by sci-fi writers will not happen: these hyper-intelligent beings will be as dependent on the health of the planet as we are. They will need the planetary cooling system of Gaia to defend from the increasing heat of the sun. Gaia depends on organic life. We will be partners in this project. It is crucial, Lovelock argues, that the intelligence of Earth survives and prospers. We are at present the only beings capable of understanding the cosmos, but he speculates that the novacene could be the beginning of a process that will see intelligence suffusing the entire cosmos. At the age 100, Lovelock has produced the most compelling work of his life. 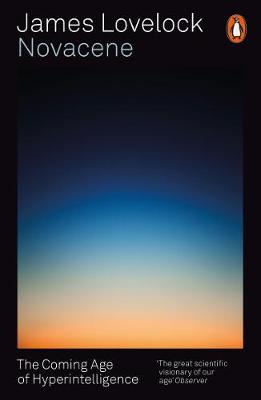 Paperback
Novacene: The Coming Age of Hyperintelligence also appears in these Categories:

The Art of Statistics: Learning from Data
David Spiegelhalter
€12.05

The Origin of Species
Charles Darwin
€2.99

Out of Our Minds - What we think and how we came to think it
Felipe Fernandez-Armesto
€15.65

How the Brain Works: The Facts Visually Explained
DK
€20.70

Other Minds: The Octopus and the Evolution of Intelligent Life
Peter Godfrey-Smith
€12.20

A Brief History Of Time: From Big Bang To Black Holes
Stephen Hawking
€12.20

The Mathematics of the Gods and the Algorithms of Men: A Cultural History
Paolo Zellini
€13.40

The Social Instinct: How Cooperation Shaped the World
Nichola Raihani
€24.40

The Genes That Make Us: human stories from a revolution in medicine
Edwin Kirk
€20.70