Strange Case of Dr Jekyll and Mr Hyde and Other Tales

'Instantly the spirit of hell awoke in me and raged...I was suddenly struck through the heart by a cold thrill of terror.' Stevenson's short novel, published in 1886, became an instant classic. It was a Gothic horror that originated in a feverish nightmare, whose hallucinatory setting in the murky back streets of London gripped a nation mesmerized by crime and violence. The respectable doctor's mysterious relationship with his disreputable associate is finally revealed in one of the most original and thrilling endings in English literature. In addition to Jekyll and Hyde, this edition also includes a number of short stories and essays written by Stevenson in the 1880s, minor masterpieces of fiction and comment: 'The Body Snatcher', 'Markheim', and 'Olalla' feature grave-robbing, a sinister double, and degeneracy, while 'A Chapter on Dreams' and 'A Gossip on Romance' discuss artistic creation and the 'romance' form. Appendixes provide extracts from contemporary writings on personality disorder, which set Stevenson's tale in its full historical context. ABOUT THE SERIES: For over 100 years Oxford World's Classics has made available the widest range of literature from around the globe. Each affordable volume reflects Oxford's commitment to scholarship, providing the most accurate text plus a wealth of other valuable features, including expert introductions by leading authorities, helpful notes to clarify the text, up-to-date bibliographies for further study, and much more. 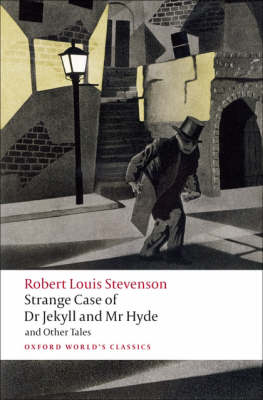 Paperback
Strange Case of Dr Jekyll and Mr Hyde and Other Tales also appears in these Categories:

A PORTRAIT OF THE ARTIST AS A YOUNG MAN
James Joyce
Paperback
€8.75

The Castle of Otranto: A Gothic Story
Horace Walpole
Paperback
€5.99

Season of Migration to the North
Tayeb Salih
Paperback
€12.00

A Visit from the Goon Squad
Jennifer Egan
Paperback
€11.10

No One is Talking About This
Patricia Lockwood
Trade Paperback
€12.99